US unilaterally just pulled out of the 2015 Nuclear-Peace Deal between six major nations and Iran, AFTER Iran complied and fulfilled its obligations, as VERIFIED by the members of the United Nations Security Council (UNSC), International Atomic Energy Agency, and even the US State and Defense Secretaries.

This is not the first time, as the US did the same to Iraq, Libya before invading and turning the countries into warzones… Is Iran, North Korea, Asia next?  Is this why the world thinks the US is the greatest threat to world peace?

Let’s compare how many times Iran used its military for aggressive purposes vis-a-vis the US: 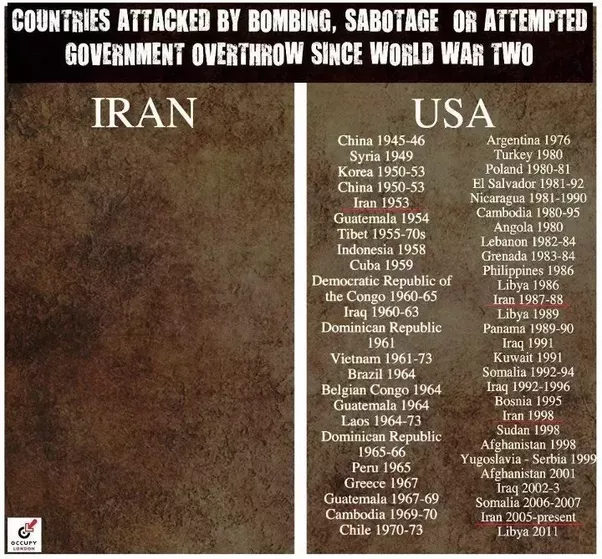 All the other UNSC Members i.e. United Kingdom, France, Russia, China, plus Germany AGREED that Iran had followed its obligations under the Iran Nuclear Deal or officially called the Joint Comprehensive Plan of Action (JCPOA), which took over a decade to negotiate.

Europe defended the deal and warned against opening it up for renegotiations… so the US unilaterally pulls out!

Federica Mogherini, the European Union’s high representative for foreign affairs and security policy, had this to say:

“With quite a good number of conflicts, crises, and a nuclear threat coming from a different part of the world—the international community cannot afford dismantling an agreement that is working and delivering.

“This is a UN Security Council Resolution… And as such, all member states of the United Nations are considered to be bound to the implementation of it.

“So, it doesn’t belong to one country, to six countries, to seven countries, to the European Union—it belongs to the international community.”

The International Atomic Energy Agency (IAEA) investigation also concluded that Iran had complied its end of the bargain.

Even Former US Secretary of State Tillerson and US Defense Secretary Mattis testified before the US Congress that Iran had complied with the provisions of the deal.

This video is an overview of the IMPERIALISM of the US and UK and big oil interests including British Petroleum (also recently known as BP) toward Iran. The CIA led it’s first coup to overthrow a foreign leader against Mohammad Mosaddegh in 1953,  all the while the supposed leaders in Washington continue to demonize Iran’s leaders on flimsy grounds as more pretense to continued Middle East war and occupation by the U.S… Study the modus of the CIA in how U.S. starts wars based on false pretense.

HISTORICAL BACKGROUND ON IRAN:
Iran has a 7,000 year-old civilization, boasting of the first recorded laws on Human Rights and Protection of Women and Children.

Great minds from Iran:  The director of the Mars Project.  The first woman honored with the Fields Medal (the highest honor in mathematics). The inventor of LASIK. The inventor of the gas laser… Christiane Amanpour of CNN. Davar Ardalan of National Public Radio. Farnaz Fassihi of The Wall Street Journal. Cyma Zarghami of Nickelodeon. Mark Zandi of Moody’s Analytics.  Empire-builders, poets, mathematicians, astronomers, scientists…

Omar Khayyam: poet, astronomer, mathematician.
“A loaf of bread, a jug of wine, and thou.”