April 11 (Wed): China says US should give Syria “An Opportunity to Explain” before US attacks.  Russia and Syria repeatedly emphasized that accusations of chemical attacks are ‘lies.’ The Syrian government also welcomed the U.N. delegation to investigate in Douma.

Apri 12 (Thurs): US Defense Secretary Mattis admitted the US did not have conclusive evidence Syria used chemical weapons.  Accusations against Syria based on social media. Mattis also said that Washington was “committed to ending that war through the UN-orchestrated effort.”

Lord West, former UK chief of intelligence, had described how in his view the claim that Bashar Assad ordered the attack “doesn’t ring true,” asking “what benefit is there for his military?” He went on to say “we know that in the past some of the Islamic groups have used chemicals, and of course there would be huge benefit in them labelling an attack as coming from Assad.” 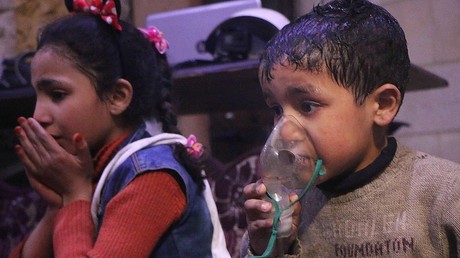 West went on to question the ‘evidence’ provided by groups like the White Helmets and the World Health Organization, both of which he described as “not neutral.”

Lord then described how in the past he had been put under pressure to support politically motivated narratives: “I had huge pressure put on me politically to try and say that our bombing campaign in Bosnia was achieving all sorts of things which it wasn’t. I was put under huge pressure, so I know the things that can happen.”

**Why did the US rush bombing Syria without waiting for a UN investigation? What did it have to hide?

Global Reactions on US-UK violation of UN most of the media fail to report:

Syria destroyed its chemical weapons stockpile in 2013 in a deal brokered by Russia and the United States in exchange for the latter’s agreement not to attack the Middle Eastern country. In 2014, the Organization for the Prohibition of Chemical Weapons confirmed that Syria’s chemical weapons arsenal had been eliminated.

What’s stopping the US from UNILATERALLY bombing the rest of the world ?